WHY WE LOVE THE NEW SALOMON SPEEDCROSS 5

A couple of years ago, I ran the infamous Sixfoot Track Marathon, a gruelling ultra that finishes with a desperately steep descent lasting forty minutes. Slipping and stumbling down a trail littered with a thousand golf-ball sized stones, I despaired that any shoe would ever be right for these treacherous conditions. But in Salomon’s new Speedcross 5, I think that trail might have met its match. 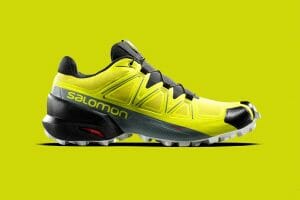 A sneaker with sass
Coming from Salomon’s high-tech S-lab, the shoe’s design is unapologetically performance oriented, but its good looks have created a bit of a stir in the fashion world, with some claiming it’s a dad sneaker with sass. Looks aside, the welded upper continues all the way to the ground, creating a snug-but-cool cocoon that protects both foot and midsole foam from the hazards of the trail.

The shoe is not as light as some trail runners, but the moment I slip it on, the word plush pops into my head, obliterating all thoughts of weight. Around the foot, the cushioning is divine, cloud-like. But underfoot, the shoe is firm and responsive. And it’s that sole that really sets this shoe apart from other trail runners. The tread lugs are nothing short of huge. Widely-spaced and chevron-shaped, each one is bigger than the tip of any of my fingers. There are thirty of them, angled for maximum breaking at the heel, and push-off grip under the forefoot. It’s like there are thirty rubber claws under each foot, just waiting to attack the earth.

And that’s exactly how this shoe runs. With a ten millimetre drop and a moderate stack-height, it’s very competent on hard surfaces, but it seems hungry for the rough stuff. There’s a slight horizontal play in those lugs, which is noticeable but not unpleasant. 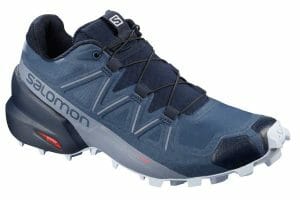 In its element
On grass, it’s so grippy that I think I’d probably dig a moat if I ran enough laps of my local oval. But when I find myself on a bona-fide trail, the Speedcross 5 is truly in its element. From sandstone platforms to mud gullies, the shoe is shockingly grippy. It eats the miles without losing its spring, and even on long runs its comfort never falters. The toe-box is narrower than other brands, but it never feels tight, and the speed lace system locks in the fit effectively.

I’m yet to find a surface where this shoe is not superior to every trail shoe I’ve ever run in. It’s more responsive than a Hoka, as springy as a Nike, as grippy as a La Sportiva and as tough as a Mizuno. And as for that harrowing descent on the Sixfoot Track? Ask me next weekend and I’ll let you know how it goes.

Want more stories like this one? Check out our NOURISH section. While you’re here, why not sign up to our newsletter and be the first to receive wellness discounts, access to exclusive workouts, competitions and a whole lot of wellbeing tips to live a life of balance (hello, shiraz), sweat and (happy) tears.

Denby Weller is a freelance journalist and lecturer in journalism at the University of Technology, Sydney. She has worked as a video journalist, multimedia journalist and freelance writer for publications including the Sydney Morning Herald, BBC, News.com.au, Lonely Planet, and lots of others, but right now she can't remember their names. Her acclaimed Trekking the Annapurna Circuit for the formerly glorious Fairfax Media won lots of, er, acclaim, and was shortlisted for several awards but didn't win any. On weekends, she likes climbing rocks and running silly distances. She is a columnist for Australia's best (Australia's only) rock climbing magazine, Vertical Life. She is also fond of writing about herself in the third person. www.denbyweller.com.

SPORTS BRAS: THE GOOD, THE BAD AND THE SHAPELESS

ROADTEST: WHY WE LOVE THE NEW UA HOVR RUNNING SHOES

WHAT WE REALLY THINK OF NIKE JOYRIDE RUN FLYKNITS

AN INSIDER’S GUIDE TO BUYING ACTIVEWEAR