The bow of the boat dropped suddenly and I felt my stomach lurch into my throat as the vessel plunged through the freezing sea spray.

Eventually the hull crashed back down onto wave, dipping so low in the water I thought it might go under. But it didn’t; it just ploughed down the mountain of water into a trench so deep that the crests of the waves around us were too high to see over.

Shark Alley bound
To the starboard, a whale flopped out of the steely water, drawing shouts of glee from the passengers around us. Twenty kilometres off the coast of South Africa’s Gaansbaai, we speared across the surface of the Southern Ocean, in search of great white sharks.

We were aboard a boat purpose-built for these waters, but even the crew looked sceptical at the mountainous waves. Some of them were breaking from the sheer size they’d attained on their journey from Antarctica. We’d been told that these three-metre swells and the 50kph southerly were the worst conditions the crew would operate in. Great.

Some of our fellow passengers had left the trip on hearing this. July in Africa’s deep south wasn’t for everyone.

I clung to the gunwales and tried to quell the rising sea-sickness. The world-famous Shark Alley is a tiny trench between a reef and a low rocky island, far out beyond the waters of Gaansbaai. It’s said that there are more great whites here than anywhere else on earth.

Shark Ho!
When we reached the entrance to the ‘alley’, the boat turned its beam to the huge waves, and the captain wrestled us towards a strip of safe water barely 20 metres wide. With each swell the boat rolled wildly and skidded sideways towards the rocks. After coming over the top of each wave, we slid back in the opposite direction towards the reef that was marked out by thundering breakers. It seemed impossible that we would make it. The ocean was so wild here, and so vast. There would be no survival if we ran aground.

But after a few minutes, the engines roared with a perfectly-timed thrust, and we slipped into the ‘alley.’ The calm turquoise waters of the company’s ads were nowhere to be seen. Here, the remnants of the huge waves eddied and swirled madly, creating a chaos of chop. We made for a diving cage that had been left moored to a buoy here earlier this morning. 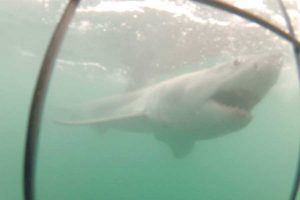 ‘Shark, ho!’ yelled one of the crew, and we followed his gaze to see not one, but two great whites circling the cage. While the crew made the cage fast to the side of the boat, we geared up in 7mm wetsuits. The fleece-lined suits would keep us safe in the water for rotations of 15 minutes, we were told. We were welcome to go in as many times as we liked.

My boyfriend and I were the first people ready, so I grabbed my GoPro and we clambered down the ladder as the boat pitched and yawed madly in the chop. The cage was long and narrow – as wide as a domestic hallway – with rails for the hands to grab and the feet to rest on.

Freezing Temperatures
Even through wetsuit, booties and hood, the water was breathtakingly cold. Gasping in disbelief, we edged along to the end of the cage. By the time we got there, I could see my hands working but I couldn’t feel them at all. I pawed at the ‘record’ button on the GoPro and ducked my head under.

The roar of the wind and nearby breakers, the shouts of the crew and the groaning of the boat were all instantly replaced with silence. In the cloudy aqua waters, there were sharks everywhere. Four of them, sleek and beautiful and fast. They torpedoed out of the murk like silver spirits, their beautiful white bellies glinting as they spiralled around us.

All was forgotten. The motion of the water, the cold… nothing existed except the incredible show before us.

The crew expertly tossed a lure and a bait into the water on long ropes, then dragged them sideways past the cage, while the sharks swooped and dived after them like arrows through the water. Time disappeared. I forgot to be afraid and marvelled at their perfect adaptation to this dread place.

For days afterwards, I would find myself returning to the silent submerged world of the cage, and those silver water spirits.

After some time, we were summoned back to the deck, and I wrestled the suit from my body, knowing I was too cold to get back in. Out of the water, my seasickness returned, and the trip back to shore was nightmarish. But my mind kept returning to the freezing water, to feelings of awe and benevolence toward these most dangerous of monsters. I looked in the other divers’ eyes, and the crew’s – they all looked like I felt. The sharks had cast a spell on them, too.

See my video of the day here:

Want more stories like this one? Check out our ADVENTURE TRAVEL section. While you’re here, why not sign up to our newsletter and be the first to receive gym and class discounts, access to exclusive workouts, competitions and a whole lot of fitness information for living a healthy life in Sydney!

Denby Weller is a freelance journalist and lecturer in journalism at the University of Technology, Sydney. She has worked as a video journalist, multimedia journalist and freelance writer for publications including the Sydney Morning Herald, BBC, News.com.au, Lonely Planet, and lots of others, but right now she can't remember their names. Her acclaimed Trekking the Annapurna Circuit for the formerly glorious Fairfax Media won lots of, er, acclaim, and was shortlisted for several awards but didn't win any. On weekends, she likes climbing rocks and running silly distances. She is a columnist for Australia's best (Australia's only) rock climbing magazine, Vertical Life. She is also fond of writing about herself in the third person. www.denbyweller.com.

OUR PICK OF THE BEST FITNESS HOTSPOTS IN BALI

OUR PICK OF THE BEST HIKES IN SOUTH EASTERN CHINA

WHAT TO PACK FOR YOUR NEXT HIKE

ITCHY FEET? HERE’S WHERE YOU SHOULD TRAVEL IN 2019