TANZANIA: THE CYCLING ADVENTURE OF A LIFETIME

Children in colourful rags dash around, women nattering to each other stroll side by side, car horns bleep, motorcycles zigzag through traffic. A flurry of colour, noise and infectious energy, Arusha is one of Tanzania’s busiest cities and I’m keen to soak up the buzz while I can. Soon I’ll be out of the support truck and on my bike, cycling through a national park where I’ll be keeping my eyes out for wildlife… not people.

But first, coffee. There are 15 of us and we need to fuel up, so we stop at a coffee plantation in the town of Tengeru (Tanzania is renowned or its coffee), where a charming woman who introduces herself as Mama Gladys sings traditional African ballads while crushing beans into powder. The coffee, predictably, tastes amazing.

Our first cycle is into Arusha National Park and the chaos quickly changes into tranquility. Instead of car horns I hear the rustle of tropical trees swaying in the wind; instead of women singing I hear parrots and finches twitter; it’s about the only time from then on that there are no children high fiving and trailing us. The only people I see now are park rangers here and there; they emerge unexpectedly from behind trees to snap iPhone shots of us whizzing past in our lycra. We are the first group to officially cycle through the park and news gets around quickly. 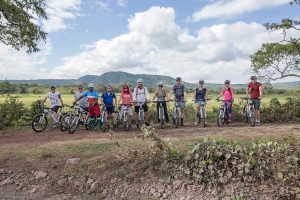 A few days into the trip we make national television and accidently become honorary celebrities. From then on when we cycle through large towns we’re met with admiration and high fives. In some of the smaller villages, where TVs are not commonplace, we’re simply met with bewilderment.

One week, 112 kilometres, zebras, leopards, lions, giraffes, hyenas, warthogs… and Maasai. Welcome to Intrepid Travel’s ‘Cycle Tanzania’ adventure – an extraordinary expedition and one of 17 cycling-culture tours launched by the adventure travel brand in September 2016. I was one of a lucky few privy to a condensed sneak preview earlier this year, prior to the official launch.

Tanzania offers a wealth of colourful experiences. There’s the safari route for wildlife lovers, Mount Kilimanjaro and Mount Meru for keen climbers, encounters with the Maasai for culture connoisseurs, plus plenty more. But seeing the country in the saddle offers a different view. 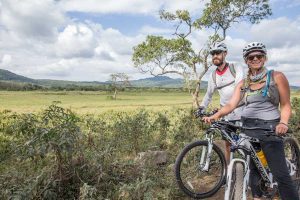 Spotting wild African animals is generally something you envision doing from the safety of a safari vehicle, so cycling into Arusha National Park – where wild creatures roam free – is a first for all of us (for safety’s sake there’s a ranger escorting us).  Although it’s a cycling trip, riding is not the entire focus. Sure, you need to be relatively fit as large chunks of the day are spent in the saddle, but there are plenty of side trips and the occasional siesta (planned and unplanned) to balance it out.

In Arusha National Park we stop often. We pause at a viewpoint overlooking a lush green valley to watch zebras feed in the long grass and warthogs create a small dust cloud in their wake. We stop a few kilometres father after someone in the group notices a giraffe rustling about in the dense foliage. And when the hills become tough some of us walk pushing our bikes and stopping even more frequently. 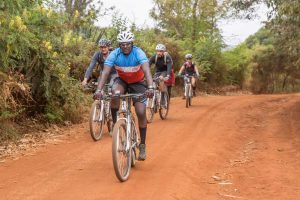 A few days later I jump in the support vehicle instead of tackling a lengthy incline. “There’s no shame in that,” our charismatic guide Justaz Molel tells me. “I know,” I answer, recognising that my thighs will thank me for the breather.

The following day we zoom past dusty sweeping plains, we weave our way along bumpy roads that probably aren’t on Google Maps, and we slow down to high five beaming kids who chase us for as long as they are able to keep up. No matter how far away we might be from a village, there always seems to be a youngster nearby just waiting to high five us. 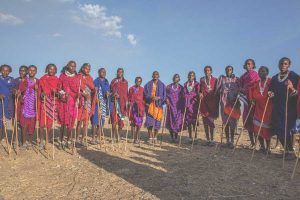 The highlight of the trip is our Maasai village visit. We take a gravelly dirt road to Mtu Wa Mbo village, where we are received with kindness and hospitality. The Maasai residents perform a ceremonial dance that involves the men of the village leaping high and the women shrugging their shoulders and shrieking. Some of us join in, although the men from our group don’t jump nearly as high as the Maasai warriors and we ladies clearly have not perfected the art of the shoulder-shrugging dance. 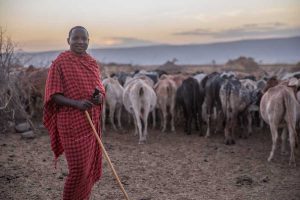 Exhausted after hours in the saddle followed by an unexpected bout of merry dancing, we feast. The village elders have slow cooked goat for us, using the traditional in-ground method, and a lanky man sporting a long red wrap tears tender shards of meat from the bone and passes the pieces around. When in Rome… or in this case Mtu Wa Mbo. 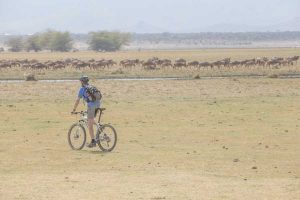 The days seem to roll into one long and wonderful memory. We cycle to Lake Manyara one clear day, first bouncing our bikes along rocky tracks before emerging into a huge verdant plain. Here we stop frequently – to watch wildebeest and gazelles trot, to gawk at flamingos not doing much at all, to chat to local fisherman. Then we jump back on our bikes only to stop again soon after for another photo opportunity. 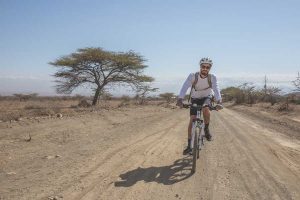 The occasional four-wheeled safari jaunt (thankfully, when we first spot lions we’re inside a safari vehicle) and various cultural experiences are included, but biking is the activity we all look forward to most each day… even though it’s also the activity we complain about just a little.

We moan about our sore rears and tired legs, about our dust-stained clothing and the occasional bug flying into our eyes. But that’s the yin and yang of self-propelled travel, a small price to pay for the opportunity to be part of the landscape, and not just a spectator. 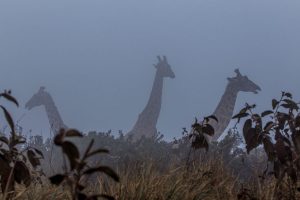 Tatyana Leonov is a writer, editor, avid traveller and determined dreamer, based in Sydney when she's not on the road. She’s mastered (beginners’) yoga in Goa, partied with Russia’s elite in a Moscow club, sampled local delicacies all around the world (including a camel burger in Morocco and guinea pig in Peru), trekked to Nepal’s Annapurna Base Camp in Havaianas and had a short-lived career as a Bollywood star. She is also the managing editor of Travel ideas, the magazine for Flight Centre.

6 LOCAL TEAS THAT ARE PERFECT FOR A PICK-ME-UP

HIKES IN THE ROYAL NATIONAL PARK FOR EVERY FITNESS LEVEL