WHERE TO SNORKEL AND DIVE IN FIJI

Fiji is often sidelined as a family destination full of packaged deals and big hotel culture, but over the past few years it’s been slowly reinventing itself as an adventure mecca. Generally known as the ‘soft coral capital of the world’, there are over 300 islands that make up the nation of Fiji, and in these warm waters columns of coral stretch up to the surface creating homes for manta rays, reef sharks, angelfish and butterfly fish. If you’re not into diving, there’s plenty of locations that can be explored by swimming or snorkelling, or you could get PADI certified while you’re there. 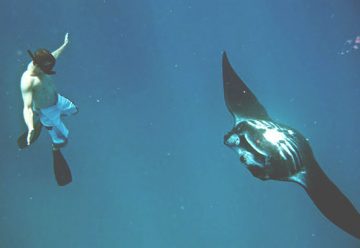 Yasawa Islands
The Yasawas are a group of 20 volcanic islands, many of which are uninhabited. Outside the resorts, there are few facilities; no roads, no shops, no ports. The water is impossibly aqua though, and the resorts (which range widely in price) can be reached via ferry or, wallet-permitting, seaplane. Between the months of May and October, you can swim with manta rays as they travel through the channel between Nanuya Balavu and Drawaqa Islands. These huge creatures are gentle and won’t eat you! There are hundreds of interesting dive sites nearby, as well as some incredible night dives, cave dives and shark dives.
How to get there: The waters in front of Mantaray Island Resort are ridiculously clear and packed with coral. They also just became Fiji’s first accredited Freediving operator. You can get to Mantaray Island Resort via the high-speed ferry from Port Denarau or via a seaplane and helicopter transfer.

The Bligh Waters
This stretch of tropical water lied between Viti Levu and Vanua Levu islands, and is home to some of the best diving in Fiji. There is a large volumne of sea water that flows through this relatively narrow area so there’s abundant marine life. Divers can expect to see rainbow coral, sharks, and turtles hiding in tunnels, canyons, and caves. There are 15 main sites, which can be vulnerable to currents depending on the weather. One of the most well known is Mellow Yellow, aptly named for its blooming yellow soft corals.
Where to stay: The best place is the stunning Wananavu Beach Resort because they work with Dive Wananavu, a qualified PADI dive facility offering trips for certified divers, as well as courses for certification. Transfers from Nadi International Airport to Wananavu take approximately two-and-a-quarter hours and are included in most hotel stays. 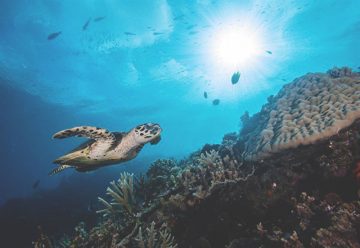 South Sea Island, Mamanuca Islands
Just to the west of Nadi (where most flights to Fiji land), the Mamanuca Islands consist of 20 tropical islands and surrounding reef. One of which is South Sea Island. It may be small,  but it’s close to Nadi and perfect for a relatively affordable day trip. For divers (and confident snorkellers) there are quality drop offs and wall dives with lots of hard corals and large schools of pelagic fish. The purposefully sunk shipwreck attracts a lot of marine life and is an easy dive.
How to get there: Stay in Nadi, and book a day or half-day cruise with South Sea Cruises. It’s an easy 30 minute cruise from Port Denarau and they run every day.

Navini Island, Mamanuca Islands
Generally acknowledged as one of the best snorkelling spots in the Mamanuca Island group, Navini Island is surrounded by a protected marine and has been since 1988. This is a safe breeding ground for marine creatures, with regular sightings of Juvenile Hawksbill turtles, lobsters, clams, stingrays and even reef sharks. The water is usually clear with an average visibility of 20m.
How to get there: Navini Island Resort doesn’t allow day trippers on the island, but they do have 10 burees which are practically on the beach. The hotel offers a PADI introductory dive, as well as an Open Water Dive Course. If you’re a guest, they will arrange a private vehicle to the Vuda Marina from Nadi Airport, where the speedboat transfer departs.

Travel details
Flights from Sydney to Nadi take around four hours, and start from $283 one way with Fiji Airways.

Lucy is a writer with a passion for fitness and adventure travel. She was editor of Women’s Fitness, Cleo and Dolly magazines and has written for high-profile websites on health, fitness and travel. She lived in Bolivia working as a journalist, as well as Argentina, where she founded an English-language newspaper with a fellow journalist. Her workouts of choice are yoga, Pilates and spin, and walking her dog, Luca, who she is obsessed with.

THE EASY WAY TO CHOOSE YOUR NEXT ADVENTURE HOLIDAY…

A YOGA AND SUP RETREAT IN THE COOK ISLANDS? YES, PLEASE

WHAT IT’S LIKE TO GO HELI-SKIING IN NEW ZEALAND

WHICH BALI RETREAT IS RIGHT FOR YOU?