ARE YOU TOUGH ENOUGH TO BE A BONDI BEACH BAR BRUTE?

From Cottlesloe Beach in Perth, to the Minnippi Parklands in Brisbane, Melbourne’s St Kilda, and Sydney’s Bondi, local councils around Australia are investing in free outdoor gyms. The concept has its roots in Muscle Beach of Santa Monica, California, the world’s most famous outdoor gym where Arnie Schwarzenegger trained, though few people know that Australia also has a ‘Muscle Beach’ of its own. 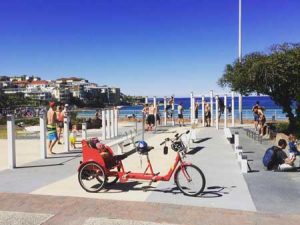 For the past 15 years, the outdoor gym on the northern end of Bondi Beach has attracted a steady stream of locals and tourists who’d randomly drop in to test their mettle on the chin up bars, do some stomach crunches or crank out a few dips. But in recent years the facilities had become increasingly weather-worn, more suitable to a correctional institute than the boardwalk of Australia’s most visited beach.

Last summer the local council took note, installing 12 new pieces of training equipment as part of a $100,000 facelift. The outdoor gym at North Bondi is more popular than ever and sparked a new beachfront fitness movement: a clique of exceptionally well-toned gymnasts, acrobats and athletes who swing like monkeys from bar to bar, form human pyramids on the ground and pull off seemingly impossible feats of strengths, like the human flag. 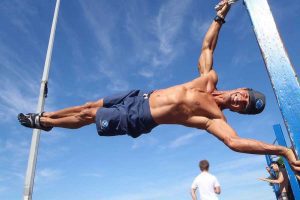 They are the Bondi Beach Bar Brutes and their energy is contagious – particularly on the first Sunday of every month when they come together for mini circuses that are inspiring passers-by to try their hand at high-intensity, low-tech bodyweight exercises. Holding court among the brutes on any given Sunday is Marcus Bondi: personal trainer and holder of several official Guinness World Strength Records. He’s also a social media sensation with more than 10 million YouTube hits. 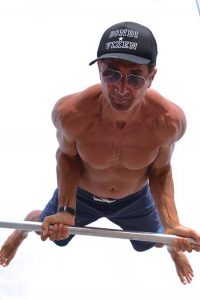 “The Bondi Beach Bar Brutes is both a group and it’s a free community event where we welcome guys and girls of all ages to give it a try,” Marcus says. “Many people think they could never do a chin up, but it’s not that hard as long as you train the correct way. Start slowly with an incremental movement, like a standing chin up where you stand with your feet on the ground and then push away from the bar before pulling yourself back in. Today we had a three year old try it and a 93-year-old try it. His wife was going nuts, telling him not to do it or he’d hurt himself, but he did it anyway! He had a great big smile on his face.” 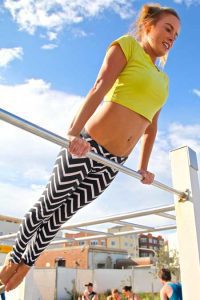 The brutes youngest recruits is Yasmin Fadel, a grade five student from St Catherine’s College in Sydney. “Any girl can do pull ups if they try their hardest,” she says. “It takes a lot of time to learn, but once you can do one, doing a few more isn’t so difficult. I can do five now.” After pulling off a few moves, Yasmin forfeits the high bars to Omar Soliman. An art director from Coogee with the rippled fat-free physique of a Russian gymnast, he executes the single most challenging and impressive move of the day: a ‘giant swing’. Swinging his body to-and-fro, he collects enough height and momentum to execute a death-defying 360-degree revolution around the bars. Around and around he goes, five or six times before staging a dismount. The crowd applauds. 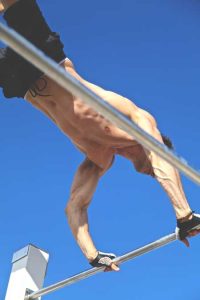 “Everything here is learnt through progression and this move is no different. You just push yourself past your comfort zone each time and eventually you get it,” Omar says. “It took me three months of daily training to learn the giant swing. I spent one month of that time studying technique and the rest of the time trying to overcome my fears.”

On the outdoor gym’s new heavy-duty floor mats, the Bondi Bar Brutes’ sister group – the female-dominated Acronuts – step into gear. “We are all crazy for acrobatics,” says Lilian Holdada, a physical education teacher at Cranbrook School at Rose Bay. “And we’re very open to having new people join us at Bondi or at one of our classes.”  What the Acronuts do isn’t exactly acrobatics. It’s acroyoga – a kooky combination of acrobatics, yoga and performance dance that sees two or more people – a base and a flyer – pull off a series of swan-like bodyweight lifting and balancing movements. 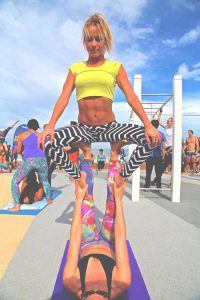 “I can be both base and flyer, but women usually do more flying than basing because the base has to have really strong legs,” Lilian says. “But being a flyer is not easy because you need lots of flexibility and to stay very still. Otherwise, your base will be unstable.”

Acronuts newest member, graphic designer Isabella Sweet, is yet to try basing. “I do a lot of yoga and when I saw acroyoga at festivals I thought it looked like a lot of fun and wanted to give it a try,” she says. “This is only my second class, but I can tell you it’s not as hard as it looks. You’re hanging upside down with your shoulders on someone’s feet and then you spring out of it in a way that kind of looks good, and ask yourself ‘how the hell did I do that?’ And unlike the bar work, you don’t have that far to fall. If you do slip, there’s usually someone soft to fall on.” 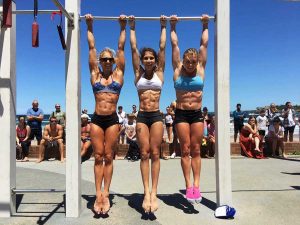 And it’s far from being an exclusive group of competitive muscle heads, despite some rumours, it’s actually a good place to make new friends, says fellow Acronuter, IT manager Shannon Lancour. “Can’t you see all the shirtless muscley men standing around us?”

OTHER FREE OUTDOOR GYMS YOU SHOULD TRY OUT

SYDNEY
Also recently revamped, Camperdown Park has the most comprehensive fitness stations you’ll find outside a gym in Sydney, with elliptical, standing bike and pull-down machines.

MELBOURNE
In April, a new Fit-for-Parks outdoor gym was installed in on Blessington Street 200 metres from the beach in St Kilda. Its’ designed to cater from 12 year olds right up to the elderly.

ADELAIDE
The 1.9km gravel running circuit in Victoria Park has a series of fitness stations with outdoor fitness equipment that when combined ensure a full body workout.

BRISBANE
In June, a new $220,000 facility – Brisbane’s first fully equipment outdoor gym – opened in the Minnippi Parklands in Tingalpa. The nine-piece gym has a 25 year lifespan.

PERTH
Cottlesloe Beach has a designated workout space with chin-up and push-ups bars, steps and absercisers. Scarborough Beach also has workout equipment on the grass near the playground.

Ian Lloyd Neubauer is a Sydney-based journalist and photojournalist. He is an Asia-Pacific stringer for TIME magazine, CNN, the BBC and Al-Jazeera, with expertise covering Papua New Guinea, East Timor, the South Pacific, Indochina and the Australian outback. He also contributes locally to GQ Australia, The Sydney Morning Herald, The Australian Financial Review and Australian Property Investor among dozens of others publications.

HOW TO GET FIT FOR FREE IN SYDNEY

AN EXPERT GUIDE TO WORKING OUT AT MANLY BEACH

A FITNESS GUIDE TO THE SUTHERLAND SHIRE

A FITNESS GUIDE TO PARRAMATTA

HIKES IN THE ROYAL NATIONAL PARK FOR EVERY FITNESS LEVEL

SYDNEY’S BEST DOG-FRIENDLY PARKS TO BREAK A SWEAT IN