OUR PICK OF THE BEST HIKES IN SOUTH EASTERN CHINA

Looking out over the lush tree-covered karst pillars and cliffs, you can almost picture a blue Na’vi flying by on the back of a dragon-like bird. Yes, this UNESCO site in China inspired the look of the movie Avatar.

China has a surprising number of mountainous hiking areas. Strangely shaped mountains with fantastic views predominate in southeastern China, particularly in Hunan, Fujian and Jiangxi provinces. UNESCO awarded world heritage status to several areas ideal for hiking, and we picked the most scenic to tell you about. 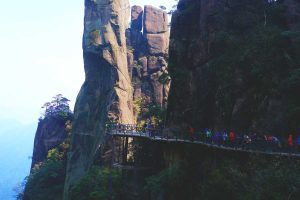 The country’s most breathtaking scenery is popular, and so China has made it easy for tourists to see it. Some areas are reached by cable car, and others from trails beginning near parking lots. To protect the natural landscape, paths are surfaced, even paved on popular routes. Walkways cantilevered out from the sides of cliffs give safe access to otherwise impossible-to-see views. Hikers can expect to climb hundreds if not thousands of stairs.

You don’t need to bring much of anything in a day pack, aside from a camera and, depending on the weather, sunscreen or rain gear (sometimes both!). On each mountain there are kiosks selling bottled drinks and local snacks. Foreigners can get to these shans (mountains) independently by bus or hiring a car. Non-Mandarin speakers will find it easier to hire an interpreter or to go with a guided group.

The city of Shaoyang is a good base for several hikes in Langshan National Park, each with dazzling views of the area’s strange Danxia peaks and columns. 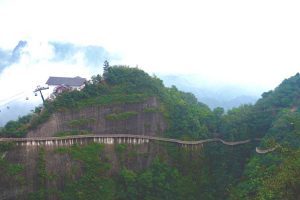 Pepper and Camel Peaks: Climb to cantilevered walkways hanging off sheer walls for beautiful views. Travellers hoping to spark some baby-making shouldn’t miss Pepper Peak: many of the columns are rather phallic-looking, and at the end of the hike you must pass through the narrow opening of the Danxia Linear Valley, which resembles a stone vulva. 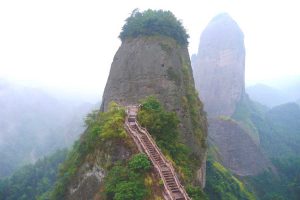 Tianyi Alley: Though the whole climb is photo-worthy, the highlight is walking through a cleft in the mountain eroded by water. This almost-tunnel is 238 m long, has 80-120 m high walls, and is just 30 cm wide at its narrowest.

There are two main mountains to explore near Hunan’s city of Zhangjiajie. Nearby is Yellow Dragon Cave if you’d like an underground hike too.

Wulingyuan Scenic Area: This Avatar-inspiring park has two different areas to tour,  connected by a short shuttle bus ride. Walk along pathways at the mountain’s edges to admire the surreal vegetation-topped pillars. Take the cable car up one side and go down the world’s tallest outdoor elevator at the end of the day. Magnificent in winter, the area can get very crowded in warmer months. 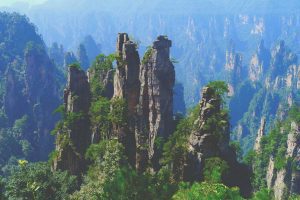 Tianmen Mountain Scenic Area: An easy, mostly flat walk, visitors reach the top of Tianmen Mountain by cable car or a bus ride up 99 bends of a twisting road. The views are stunning on a sunny day, but it looks other worldly when covered with cloud. The trees and walkway railings are covered in red ribbons with wishes written on them. 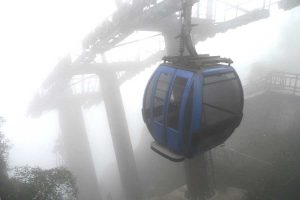 Cable Car to the Clouds, Tianmen

Wuyi Mountain: Passing small waterfalls and beautiful temples, the steep climb up Tian You Peak’s steps is rewarded by frequent views of the cyan Nine Bend Stream. Nearby, still within the national park, a flatter walk takes you to the ‘mother tree’ of the most expensive tea in the world, Big Red Robe. Stay in Wuyishan or in the tiny town of Xingcunzhen which caters to hikers. 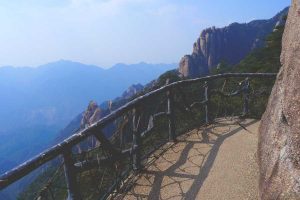 Mount Sanqingshan National Park: Though you’ll start via cable car, you’ll get a real workout in this stunning area. Climbing the thousands of steps, you might see snow in the height of summer, halos around clouds, and even white rainbows. Many of the 48 granite peaks and 89 pillars resemble animals, including a rearing anaconda and penguins staring up at the sky. If you’re quick, you can see the whole area in one day but this spot is so vast and beautiful it benefits from a two-day visit.

Johanna Read is a Canadian freelance writer and photographer specialising in travel, food and responsible tourism. She travels to four to six continents annually. Find her on Instagram @TravelEaterJohanna, Twitter @TravelEater (Twitter), and Facebook @TravelEaterJohanna.  Links to all her travel stories are at www.TravelEater.net.

WHAT TO PACK FOR YOUR NEXT HIKE

THE 9 BEST EXERCISES TO HELP YOU SURVIVE A LONG FLIGHT

THE WORLD’S BEST SKIING SPOTS, ACCORDING TO OLYMPIAN RUSS HENSHAW

A YOGA AND SUP RETREAT IN THE COOK ISLANDS? YES, PLEASE